Oh, Jupiter. If only the gas giant shifted its orbit slightly, becoming more eccentric (read: oval-shaped), it could transform the shape of Earth’s orbit, too, causing parts of the blue planet to move closer to the sun. That, in turn, would mean less unlivable ice-covered regions and the potential for more habitable zones.

That was the focus of a new study published last week in the Astronomical Journal from a University of California, Riverside team. Modeling data from our solar system as it’s known today, the scientists created a theoretical system that slightly altered Jupiter’s orbit.

“If Jupiter’s position remained the same, but the shape of its orbit changed, it could actually increase this planet’s habitability,” Pam Vervoort, a UCR Earth and planetary scientist and lead author of the study, says in a news release.

This could motivate scientists to become more detail-oriented in studying faraway exoplanets in the search for new habitable zones.

“Many are convinced that Earth is the epitome of a habitable planet and that any change in Jupiter’s orbit, being the massive planet it is, could only be bad for Earth,” Vervoort says. “We show that both assumptions are wrong.”

During an orbit, the planet receives rays from its star—for Earth, that’s the sun. The volume of rays received during orbit could create pleasant seasonal shifts or dramatic uninhabitable temperature swings, all based on the orbital proximity to the rays.

“The first thing people look for in an exoplanet search is the habitable zone, the distance between a star and a planet to see if there’s enough energy for liquid water on the planet’s surface,” Stephen Kane, a UCR astrophysicist and study co-author, says in the release. “Having water on its surface is a very simple first metric, and it doesn’t account for the shape of a planet’s orbit, or seasonal variations a planet might experience.”

The authors write that in the search for life beyond our solar system, attention should be focused on those planets that have the potential to maintain habitable conditions over the prolonged periods of time needed for the emergence and expansion of life.

These days, we’re quite adept at measuring a planet’s orbit with existing telescope technology, but the UCR teams says we should also be concerned about the degree to which a planet is tilted toward or away from a star, which helps determine the amount of rays certain areas receive.

Size comparison of Jupiter and Earth shows why any changes relating to the giant planet would have ripple effects.
NASA 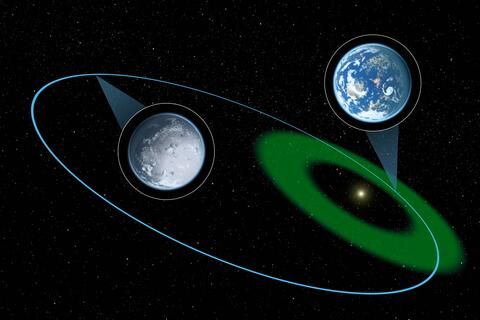 A habitable zone, shown in green here, is defined as the region around a star where liquid water, an essential ingredient for life as we know it, could potentially be present.
NASA-JPL/Caltech

In the Jupiter-Earth study, not only would a slight change in Jupiter’s orbit in one direction have a beneficial effect for parts of Earth, but the team found that if Jupiter positioned itself closer to the sun in its new orbit, it would create extreme tilting on Earth, making portions of our planet sub-freezing.

Seeing how small changes to Jupiter’s positioning and orbit lead to dramatic changes on Earth, the researchers are planning to develop methods to help them estimate factors beyond an orbit—like measuring a planet’s mass and determining tilt.

“It’s important,” Kane says, “to understand the impact that Jupiter has had on Earth’s climate through time, how its effect on our orbit has changed us in the past, and how it might change us once again in the future.”

Solution to the Deck of Cards Riddle

How to Give Your Vehicle a Waterless Car Wash

Up Your Halloween Game with DIY Pumpkin Lights

Protect Your Car From The Kia Boys. Here’s How.

How To Build a DIY Fog Machine For Halloween

How To Build a Backyard Fire Pit

How to Use a Wood Chisel