A new video that the Ukrainian Armed Forces released on Twitter earlier this week shows what many have suspected for weeks: the country has somehow managed to fit American missiles onto aging MiG fighter jets. The video depicts MiG-29 fighters firing AGM-88 missiles, also known as HARM, presumably at Russian radar targets. The setup, designed to erode Russia’s air defenses, was originally considered unlikely due to the difficulty in melding American and Ukrainian weapon systems.

“Ivan,” a Ukrainian Air Force pilot, made the video. A caption states that it was dedicated to the memory of Major Yevhen Lysenko, a fellow pilot who died in battle. There was no outward indication that the video was of anything particularly new, until sharp-eyed social media viewers realized that the missiles in the video launching off Ivan’s MiG-29 rails were actually American-made AGM-88 HARMs.

One of the 🇺🇦 pilots has made a footage of the MiG-29 fighter jets combat operations.

🇺🇦 pilot Ivan dedicates this video to major Yevhen Lysenko, his fallen brother in arms, who heroically died in an aerial fight against the 🇷🇺 invaders on March 9. pic.twitter.com/eUVYIAboDr

Modern air defense systems rely on radar to detect enemy threats. Once an air defense radar detects an incoming aircraft and missile, it can then hand off that information to defending fighters or radar-guided surface-to-air missile systems. Without radar, defending fighters can squander valuable time patrolling the wrong patch of sky, and radar-guided surface-to-air missiles like Russia’s Buk, Tor, S-300, and S-400 are unable to engage the enemy. 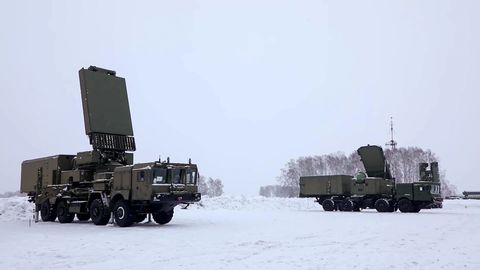 Radars typically provide detection data for multiple forms of defense, so the most efficient way to suppress or destroy the defenses is to destroy the radars—or at least force them to temporarily shut down. A radar must broadcast waves of electromagnetic radiation to detect enemy activity, and these radiation waves are detectable at a distance. In the 1960s, the Pentagon began development of so-called “anti-radiation missiles” (ARMs for short) designed to home in on an air defense radar’s emissions and destroy it.

The AGM-88 High Speed Anti-Radiation Missile (HARM) was developed in the 1980s to destroy enemy radars. HARM is designed to detect enemy radar emissions and then follow them to the source. HARM was made fast to try and catch radars before they could be turned off. It also incorporates a smokeless rocket motor to make it harder for observers to spot the incoming missile. The blast fragmentation warhead is designed to pepper the enemy radar with shrapnel, rendering it inoperable. 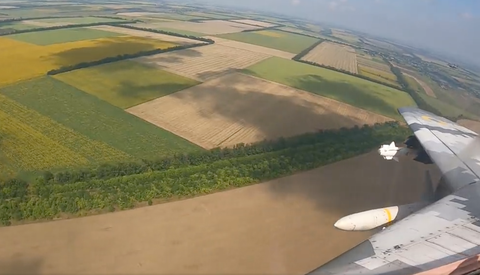 A screen capture from the Twitter video shows a large missile with a yellow band and fins on the right side of a Ukrainian MiG-29 fighter.
Ukrainian Air Force/Twitter

Ukraine’s fleet of crewed fighter and attack jets and drones like the TB-Bayraktar were active in the early days of the war, contributing heavily to the collapse of Russia’s forces along the Kyiv axis. As time went on, however, Russian air defense systems grew more competent and deadlier. Ukraine’s air force had little to no capability to engage Russia’s air defense radars, benching the country’s remaining air power.

Get to Know Bayraktar ⬇️

The first reports of HARM missile wreckage appeared on social media in early August 2022. These reports were confused by the fact that the only airplanes rated to carry HARM were the American F-16 and F/A-18 Hornet fighter jets, and Ukraine had neither in its inventory. The U.S. government, which regularly lists weapons included in military aid deliveries to Ukraine, had also not reported supplying Kyiv with HARM missiles. 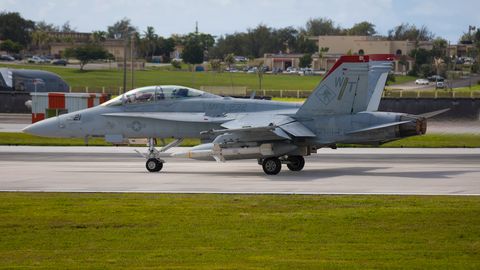 Instead, as it turned out, Ukraine had fitted the missiles to its own aging MiG-29 fighters. During an August 19 background briefing with the press, an unnamed U.S. defense official acknowledged on August 19 that the Pentagon had sent HARMs to Ukraine, stating, “we are providing additional High-speed Anti-Radiation Missiles. These are the HARM missiles. Ukraine has successfully employed these missiles. They have successfully integrated them onto Ukrainian aircraft, and this enables Ukraine to seek and destroy Russian radars, so we’ll be providing additional HARM missiles.”

Providing American and NATO missiles to Ukraine has been one of many aid options discussed since Russia’s February invasion began. Some, like the Javelin anti-tank missile, have been relatively easy to deploy in an effective manner and have made a major difference on the battlefield. Others, like HARM, would require either providing Ukraine with both F-16 fighters and HARM missiles or somehow integrating HARM onto the country’s existing MiG-29s. 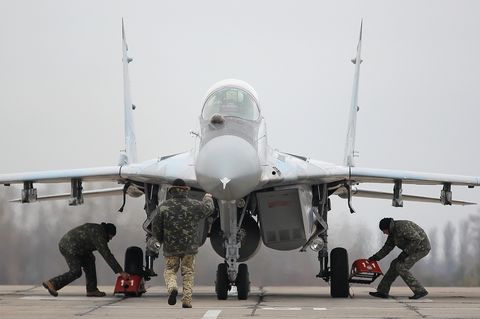 Ground crews direct a Mig-29 fighter jet in Ukrainian air force service after a training flight, Ukraine, November 2016. Ukraine had only 24 MiG-29s before the war, including eight training jets, but its numbers may have been bolstered by similar MiGs transferred from NATO countries.
NurPhoto//Getty Images

Somehow, Ukraine successfully fitted HARM to its MiGs, as the video clearly shows. This would have involved adding a NATO-style weapons pylon to the wings, integrating it with the plane’s electrical system, and adding some kind of physical launch button inside the cockpit. Ukrainian pilots are likely firing the missiles using Pre-Brief mode, which allows the pilot to fire the missile at maximum range against a known radar target. Pre-Brief mode is the simplest launch mode, requires the least amount of pilot training, and doesn’t rely on other NATO hardware not available on the MiG-29.

However Ukrainian engineers did it, the Pentagon is pleased with the results. The unnamed Department of Defense official quoted above says the Ukrainians have “successfully employed” the missiles. This likely means U.S. signals intelligence has verified radars that were emitting before a HARM attack are no longer emitting or no longer exist, period. Whatever the case, it earned the Ukrainians a second shipment of HARMs.

The M1 Abrams Tank Just Got a Dramatic Upgrade

Why the C-5 Galaxy Is Such a Badass Plane

Why the B-2 Bomber Is Such a Badass Plane

36 Years Ago Today, a Nuclear Sub Sank off Bermuda