Gear-obsessed editors choose every product we review. We may earn commission if you buy from a link. Why Trust Us?

The world’s smallest production pistol is the Kolibri (German for “hummingbird”), designed by an Austrian watchmaker by the name of Franz Pfannl. About a thousand of these tiny pistols were made between about 1910 and the beginning of World War I in 1914, when production had to stop as the economy turned to a war footing.

🎖 Don’t miss any of our best-in-class military and defense news. Join our squad with Pop Mech Pro.

The Kolibri is in all ways a standard firearm, but smaller. It uses the same simple blowback mechanism as many modern .22, .25, and .32 caliber pistols, but is chambered for a proprietary (and now rare) 2.7mm centerfire cartridge. This cartridge fired a minuscule 3-grain bullet at 650 feet per second, giving it less muzzle energy than a typical airlift pellet. 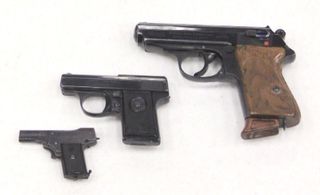 Kolibri with a Walther PPK and a Walther Model 9 for scale.
Ian McCollum

But because of its small surface area and high velocity, it should still be considered potentially dangerous. The gun was equipped with a six-round magazine and fired semiautomatically, with one shot per pull of the trigger until the magazine was emptied. Recoil was effectively nonexistent, given the minuscule size of the projectile.

How many Kolibri pistols were bought with the intention of actual self-defense is debatable, as the gun is far more of a novelty than a serious weapon. Still, it could have been seen as a legitimate deterrent against stray dogs—a common use for small firearms at the time. The sting of a Kolibri bullet could potentially frighten off a dog without subjecting the firer to the noise of a more typical firearm, or forcing them to carry something the size of a typical firearm (the Kolibri weighs just under 8 ounces).

While the Kolibri pistol is pretty petite, it technically isn’t the smallest gun in the world. A pistol built by Argentinian Carlos Alberto Balbiani in 2002 is recognized by Guinness World Records as being the smallest pistol in the world. Balbiani’s pistol uses gunpowder and is modeled after a Luger P-08 hand pistol. It measures just 2.1 inches long, with a 0.68 mm caliber. Then there’s the 2.34 mm SwissMiniGun, which is considered the world’s smallest working revolver at 2.2 inches long.

This antique watch fob pistol, made by Franz Pfannl, was surrendered to London’s Metropolitan Police in 2003 during the nationwide gun amnesty.
Stefan Rousseau - PA Images//Getty Images

But Pfannl did make guns even smaller than the Kolibri pistol. This antique pistol, shown in the image above, is a watch fob pistol, also known as a Berloque or pinfire gun. It measures just one and three-quarter inches long. According to Bob Urso, author of “The Tiniest Guns,” this style of pinfire gun was produced in Austria from the late 1800s to the 1950s. This particular pinfire pistol was turned over to the London Metropolitan Police in 2003, during a nationwide gun amnesty. The photographer, Stefan Rousseau, describes: “The tiny gun comes with nine miniature copper cartridges, two of which have been fired... The gun is nickel-plated and hand-engraved with a rabbit on one side and a deer of the other.”

Pfannl would make several other unusually small firearms during his career, including 3mm and 4.25mm designs, but the Kolibri pistol remains his most distinctive work. 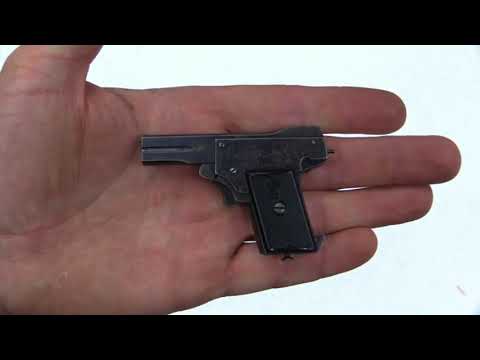 Ian McCollum is the founder of ForgottenWeapons.com, a website and YouTube channel dedicated preserving the history of rare and obscure guns from around the world.

When she’s not out riding her mountain bike, Jessica is an editor for Popular Mechanics. She was previously an editor for Bicycling magazine.

The M1 Abrams Tank Just Got a Dramatic Upgrade

Is Putin Preparing to Use Nukes in Ukraine?

The U.S. Once Tried to Field a Foxhole Bomb

The Weird History of Underwater UFOs