Once described as “spooky action at a distance” by the world’s most famous physicist, Albert Einstein, entanglement—the idea that two particles separated by vast distances could instantly influence each other—lies at the very heart of what makes quantum physics so strange and counterintuitive.

On Tuesday morning, the Royal Swedish Academy of Sciences awarded the 2022 Nobel Prize in Physics to three quantum physicists — Alain Aspect, John F. Clauser, and Anton Zeilinger — whose work confirmed this troubling phenomenon and placed it at the heart of a technical revolution. Aspect, Clauser, and Zeilinger will equally share the 10-million-krona ($915,000 USD) prize.

⚛️ Science explains the world around us. We’ll help you make sense of it all—join Pop Mech Pro.

In a statement on its website, the Nobel Committee says it jointly awarded the 2022 Nobel Prize in Physics to the trio for their separate “experiments with entangled photons, establishing the violation of Bell inequalities, and pioneering quantum information science.”

“One of the most fascinating predictions of quantum mechanics is entanglement, where widely separated particles can be prepared so that they behave as a single unit,” Ulf Danielsson, secretary of the Nobel Committee for Physics, tells Popular Mechanics. “The groundbreaking experiments of Clauser, Aspect, and Zeilinger show that this mind-boggling phenomenon persists at macroscopic distances, demonstrating the deficiency of our classical intuition.”

Danielsson, a professor of theoretical physics at Uppsala University in Sweden, refers to the fact that this phenomena of an instant quantum connection between particles across vast distances isn’t accounted for in classical physics of the everyday world.

He adds that the trio’s results are not only important to our fundamental understanding of the world, but point toward future applications like secure communication using quantum cryptography and the ability to build quantum computers of staggering power. 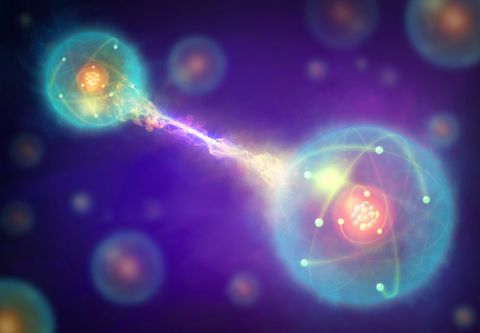 Conceptual artwork of a pair of entangled quantum particles or events interacting at a distance. Quantum entanglement is one of the consequences of quantum theory. Two particles will appear to be linked across space and time, with changes to one of the particles (such as an observation or measurement) affecting the other one. This instantaneous effect appears to be independent of both space and time, meaning that, in the quantum realm, effect may precede cause.
MARK GARLICK/SCIENCE PHOTO LIBRARY//Getty Images

In quantum physics, entanglement describes a state in which two particles are connected in such a way that measuring the quality of one — called a variable — immediately causes the other to adopt a corresponding or anti-corresponding value.

This might not sound too troubling up front, but consider that this instantaneous change in the second particle would happen even if the entangled pair were on opposite sides of the universe.

Entanglement, as it was first suggested in the 1930s, encroached on the idea of “local realism,” which can be boiled down into two statements. First, realism states that all particles have definite properties for all possible measurements. Secondly, locality says that communication between particles can’t happen faster than the speed of light.

The instantaneous action of entanglement challenged at least one of these premises, maybe both. To Einstein, via its challenge to locality, this instantaneous nature represented a threat to one of his key principles of special relativity :  the fact that nothing can travel faster than light.

✅ Get the Facts: Quantum Physics

Einstein thought that rather than violating local realism, entanglement and its “spooky action at a distance” indicated that quantum physics was incomplete; he believed that elements connecting the variables of one particle to another would eventually be found. The elements he and other physicists believed to be missing came to be known as “local hidden variables.”

The work of Clauser, Aspect, and Zeilinger is so groundbreaking and worthy of the highest prize in physics because it conclusively proved that hidden variables don’t exist. But the reason non-locality doesn’t violate relativity isn’t understood and has been hotly debated ever since. One suggestion is that entangled particles are still part of the same system, thus the distance between them doesn’t matter.

In 1964, Northern Irish physicist John Stewart Bell devised his eponymous Bell’s theorem, which suggested that locality was a testable hypothesis. Breaking local realism was referred to as “the violation of Bell inequalities.”

American theoretical and experimental physicist Clause—along with then-U.C. Berkeley graduate student Stuart Freedman, who passed away in 2012—devised the first practical experiment to hunt for such a violation in 1972. The duo built an experiment to send two entangled photons in opposite directions toward fixed polarization filters.

These filters would either block the photons or allow them to pass to a detector based on their angle and the polarization of the photon, with the result reflected in its entangled partner. The results obtained defied the rules of classical mechanics, the existence of hidden variables, and agreed with quantum theory. In other words, the experiment violated Bell’s inequality.

Aspect, a physicist from the Université Paris-Saclay and École Polytechnique, France, would come up with improved versions of Clauser and Freedman’s experiment in 1982. Built into Aspect’s tests was the ability to register photons blocked at the filter. Once again, a scientist demonstrated the violation of Bell’s inequality.

In 1997 at the University of Vienna in Austria, Zeilinger—now a senior scientist at the Institute for Quantum Optics and Quantum Information of the Austrian Academy of Sciences—went even further. He demonstrated the transference of quantum information from an entangled pair to a third particle. In 1998, he followed this work up by entangling two photons that don’t directly interact by using entangled partner particles.

Nicolas Brunner is an associate professor at the University of Geneva, where his area of research is the foundation of quantum theory and quantum information processing. That means his research strongly hinges on the concepts of entanglement and nonlocality. “Quantum nonlocality is the strongest demonstration of entanglement and demonstrates that nature is inherently non-local,” he tells Popular Mechanics. “Unlike Einstein hoped, there is no way that you can turn quantum theory into a physical theory that behaves locally. And the work of Clauser, Aspect, and Zeilinger was the first really convincing demonstration of this fundamental aspect of quantum mechanics.”

From here, Brunner explains, researchers were free to speculate about what could be done with the non-local nature of entanglement and quantum mechanics. This led to the development of quantum cryptography, in particular, and quantum technology in general.

“You can use the entanglement of photons to create a cryptographic system where two distant parties can exchange secret messages when in full privacy,” Brunner says. “Privacy and security are guaranteed by the laws of quantum mechanics.”

As for what this prize means for the fields of quantum physics and quantum information, Brunner thinks it’s great. “I’ve been working with quantum non-locality for 20 years, since the beginning of my Ph.D. To see it recognized like this by the most important physics prizes is really quite something. It’s really a recognition of the importance of subjects in the field of quantum information in general.”

At a press conference announcing the award on Tuesday, Zeilinger emphasized the contributions of his colleagues in the field of quantum physics.

“I was actually very surprised to get the call,” he said. “This prize would not be possible without the work of more than 100 young people over the years.”

Robert Lea is a freelance science journalist focusing on space, astronomy, and physics. Rob’s articles have been published in Newsweek, Space, Live Science, Astronomy magazine and New Scientist. He lives in the North West of England with too many cats and comic books.

We Could Be Living in a Teenage Alien’s Computer

Chaos Theory Explains Why Life Is So ... Chaotic

Black Holes Could Solve the Mystery of Dark Matter

How to Control Unruly Plasma in a Tokamak Reactor

These Waves Could Reveal the Invisible Universe

5 Tips to Dominate a Game of Cornhole (From a Pro)