The 40-year-old M1 Abrams tank just got a slew of new upgrades that could keep it rolling for decades. The AbramsX, introduced this week, is a comprehensive redesign that transforms the 1970s-era tank into a real 21st-century vehicle. If adopted, the tank could serve until the 2050s or even later.

On Saturday, General Dynamics Land Systems introduced the AbramsX in a YouTube video ahead of the 2022 Association of the U.S. Army convention in Washington, D.C., where the aerospace and defense company officially revealed the next-gen tank. The annual convention is typically used to introduce new concepts and doctrines for the Army, as well as new hardware the service could pick up at a later date. It’s important to note that AbramsX is not an official Army program, but a private initiative from the manufacturer.

A Brief History of the M1 Abrams 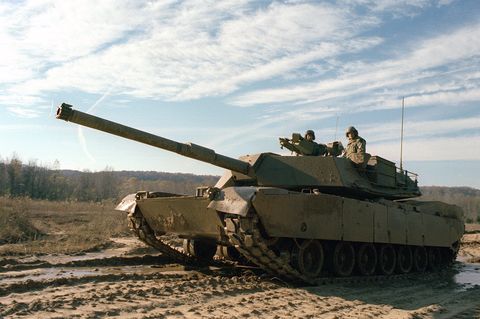 Chrysler Defense (now General Dynamics Land Systems) first unveiled the M1 Abrams in 1979 as a replacement for older main battle tanks. The U.S. Army had used a series of tanks—starting with the M26 Pershing, introduced in 1945—that eventually ended with the M60 Patton. Each tank, from the M26 to the M46, M47, M48, and M60, was a logical evolution of the previous tank. Meanwhile, the M1 was a “clean sheet” design that completely broke with this series, introducing an angular turret, British-designed Chobham armor, a new ballistic computer, an early thermal imager, and a gasoline-powered turbine engine. The result was a tank that was better protected, faster, sleeker, and capable of night fighting; In all ways, it was a dramatic improvement.

The M1 itself has undergone a similar evolution over the years. The -A1 upgrade, introduced in the late 1980s, added a new 120-millimeter main gun and depleted uranium armor that, although heavy, significantly improved armor protection. The M1A2 has parceled out upgrades in smaller batches, including a separate thermal viewer for the commander, a “silent watch” feature, allowing the vehicle to operate its thermal sights while powered down, improved ballistic protection for the crew, explosive reactive armor to defeat shaped-charge weapons, a digital backbone, digital ammunition datalink, and most recently the Trophy active protection system. 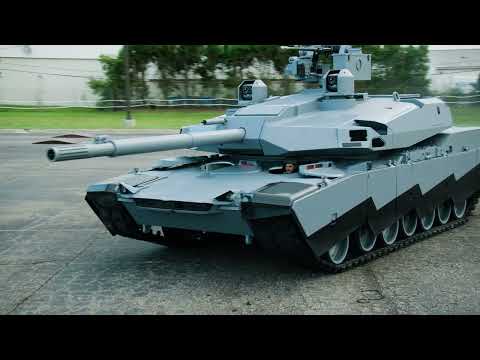 AbramsX is the biggest upgrade to the M1 Abrams main battle tank since it was introduced, reworking both the inside and the outside of the vehicle to incorporate a number of modern features. Firepower, protection, and mobility, the three traditional categories of modern tanks, are all substantially improved. Let’s examine the features in that order, as well as a few other new ones.

The next-gen tank replaces the old main gun, the M256 120-millimeter gun, with what social media accounts have identified as the XM360 120-millimeter gun. The XM360 was originally developed for Future Combat Systems, an early 2000s effort meant to replace the Army’s existing armored vehicles; The program spent $18 billion and yet produced a single working vehicle. The XM360 is the same caliber as the older M256 and uses the same ammunition. The XM360 also uses a “pepperpot”-style muzzle brake at the muzzle to help reduce recoil. The overall gun system uses composite materials and titanium to reduce gun system weight, and thus overall vehicle weight. 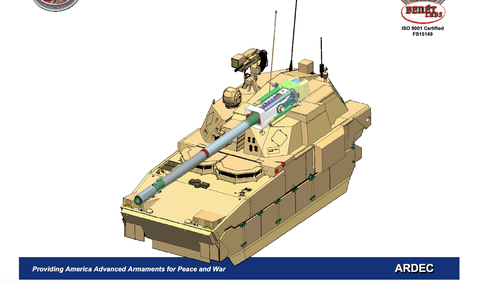 The XM360 gun was originally designed for the Mounted Combat Vehicle, a 2000s effort to develop a replacement for the M1 Abrams.
U.S. Army ARDEC

General Dynamics’ press release states AbramsX has a reduced crew size, but doesn’t elaborate. The traditional Abrams crew consists of a commander, gunner, loader, and driver, though more recent tanks, including the German Leopard 2, Japanese Type 10, and South Korean K2 include an automatic loader. AbramsX also clearly features three crew hatches in the front of the vehicle. From this, we can infer AbramsX is the first Abrams to sport an automatic loader and that the turret, redesigned and seemingly with a lower profile, is entirely uncrewed.

AbramsX is equipped on the top of the turret with what appears to be an XM914 30-millimeter chain gun, replacing both the commander’s M2 .50-caliber machine gun and the loader’s M240 7.62-millimeter machine gun. The XM914 is mounted on a remotely operated gun system, permitting the crew to fire from down inside the hull, aiming at night and through smoke using a thermal imaging system. This allows the crew engage infantry, drones, soft-skinned vehicles like trucks, and lightly armored vehicles like the Russian BMP-3 infantry fighting vehicle with the chain gun, saving main gun ammunition to engage peer threats—enemy tanks. This indirectly increases the ammunition supply for the main gun, allowing it to engage more tanks.

Protection is another area of improvement for AbramsX. The hull maintains the same shaping as previous Abrams tanks, suggesting it has the same level of protection. The uncrewed turret lacks a human crew, but reportedly includes an active protection system that shoots down incoming rockets and missiles. A large, topside panel on the top of the turret is likely a blowout panel, allowing the main gun ammunition stored in the turret to vent upward and away from the crew in the event of a detonation.

AbramsX should be the most mobile Abrams since the 1970s. The tanks have grown increasingly heavy over the years, with the inclusion of depleted-uranium armor and other features ballooning the tank’s weight over 40 years from 60 to 73.6 tons. General Dynamics states that the new vehicle both includes a hybrid power pack and reduces fuel consumption by 50 percent. Plus, there are some weight savings. The tank is also the first Abrams to use a diesel engine; the Abrams’ use of a gasoline engine has long been a logistical sticking point for an Army where the rest of the vehicle fleet uses diesel. 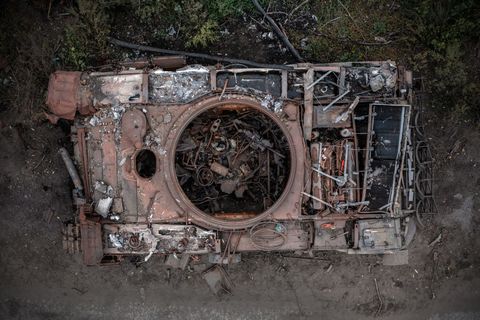 In addition to the “big three” of firepower, protection, and mobility, sensors are another key feature of modern tanks. The YouTube video says AbramsX includes “enhanced Silent Watch,” a relatively new feature that allows the Abrams to operate its power-hungry thermal sights without powering up the relatively loud (and thermally conspicuous) gas turbine engine. The tank’s new hybrid engine likely features a larger battery pack that can run these sensors longer. The tank has armored cameras pointed in all directions, giving the crew 360-degree vision without exiting the vehicle. It also seems to have radar sensors, similar to those used in self-driving cars, including one pointed upward at the rear of the tank. This suggests AbramsX’s active protection system can detect and defeat top-attack weapons like the American Javelin and Swedish NLAW.

The shift from four crew members to three will no doubt be controversial. The U.S. Army prefers a human loader, as early autoloaders, especially Soviet autoloaders, were mechanically sketchy. Four crew members also means more individuals to stand watch if the tank is forced to halt on a battlefield crawling with enemies. But autoloader technology has come a long way, and the new combined arms organization ensures that infantry are never far away from tanks. The new crew arrangement allows all three crew to sit side-by-side, collaborating and fighting together rather than at separate stations. General Dynamics also states that artificial intelligence will reduce the cognitive load on the reduced crew, though it isn’t clear how. The tank can operate alongside uncrewed armored vehicles, but how a crew of just three can fight the tank and an uncrewed vehicle is not clear, and this might be where AI steps in.

Will the Army Buy AbramsX? 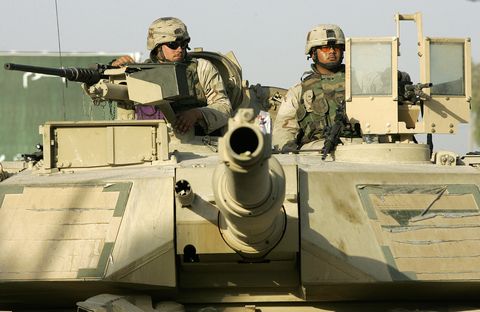 AbramsX is such a colossal leap over the existing Abrams, it’s practically a new tank. But will the mighty U.S. Army buy it?

The Army has tried and failed more than once to replace the M1, and yet another Abrams is the path of least resistance. Janes reports the tank is a technology demonstrator and not ready for adoption. Although the Army already has thousands of Abrams, and in the past remanufactured older tanks to save money, there are so many changes built into AbramsX,—from redesigned fuel tanks and a new turret, to a new engine and main gun— remanufacturing may not be feasible.

AbramsX is not only a 21st-century tank; the likely inclusion of systems like a top-attack active protection and a 30-millimeter chain gun take cues from the war in Ukraine. If adopted by the U.S. Army, it could mean the Abrams platform will soldier on until the 2050s and beyond. That’s about 50 years longer than the tank’s original designers thought it would stick around.

Why the C-5 Galaxy Is Such a Badass Plane

Why the B-2 Bomber Is Such a Badass Plane

36 Years Ago Today, a Nuclear Sub Sank off Bermuda