Next to taxis, police cars are the most recognizable automobiles. Plop one of them in a movie, and most viewers will be able to instantly identify them. However, not every police department the world over chooses the same car to drive. Here are the best, worst, weirdest, and most revered police cars.

It’s tough not to argue the Ford Crown Victoria as one of the best—if not the most popular police cars in the world. While the Blue Oval stopped making the Crown Vic in 2011, it had all the ingredients that you could ever want in a police cruiser; it was cheap, surprisingly fast, and built like a tank.

The four-wheeled American icon was originally propelled by a 4.6-liter V8 engine cranking out 210 horsepower. Ford found another 40 hp for an updated version of the Vic that it released in 2004, but that’s where the power adding ended. The real meat and potatoes of the police cruiser was its rear-wheel drive, solid-axle layout—similar to what you’d find in a truck.

Most of the Crown Vic’s durability came from its body-on-frame chassis. This meant that it could take big hits without sustaining too much structural damage. Thankfully, when impacts got bad enough to bend and break components, these behemoths were notoriously cheap and easy to repair; the chassis and body could be fixed or replaced individually thanks to them being separate from each other. Modern unibody vehicles are named as such because the chassis and body shell are all one unit. 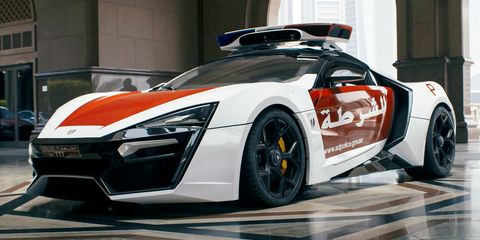 Abu Dhabi is synonymous with extravagance. This includes one of the most amazing police fleets we’ve ever seen. Among it is the Lykan Hypersport, a Lebanese-built hypercar. With only seven in existence, it’s one of the rarest vehicles in the world.

Ever since its debut at the 2013 Qatar Motor Show, the Lykan Hypersport was touted as the Arab world’s first foray into the supercar market. It was a big deal. Powered by a twin-turbocharged flat-six engine (cranking out 750 hp and 738 lb-ft of torque), the Hypersport could eviscerate any of the ultra-fast vehicles you’d find multi-billionaires driving in the United Arab Emirates.

However, the Hypersport doesn’t necessarily have what you’d call a proven track record of performance or reliability. Sure, it made an appearance in the Fast and Furious saga, but it’s since been accused of being nothing more than vaporware after disappearing soon after its fifteen minutes of fame—some news outlets even called it an outright scam. We’ll reserve our judgement, but the impact this $3.4 million car made will definitely be remembered. 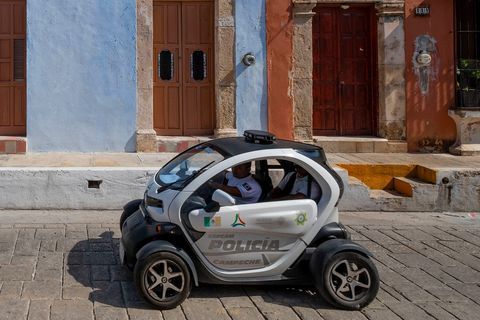 Fast patrol vehicles are great but can be difficult to maneuver in tight city streets. Here in the U.S., many police forces have fleets of Smart Cars that are able to squeeze down tight alleys. However, even the Smart ForTwo would be no match for Renault’s Twizy in a close-quarters police chase; the Twizy is nearly 2 feet narrower.

Befitting such a car, the Twizy has its quirks—like a peculiar lack of waterproofing. Even with available side windows—yes, an optional extra—trace amounts of water still make it into the cabin. 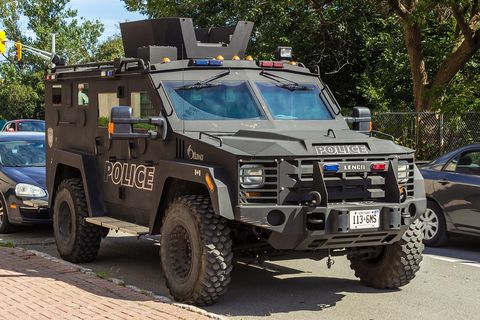 Lenco’s BearCat is purpose-built for transporting SWAT teams (and other tactical officers) in and out of harm’s way. For some perspective, a BearCat was used by police to rescue civilians in the 2015 Colorado Springs Planned Parenthood shooting, as well as the 2016 Pulse nightclub shootings in Orlando, Florida, where it breached the building. More recently, multiple BearCats were used in January of 2022 during the Congregation Beth Israel hostage crisis in Colleyville, Texas.

While there are mixed opinions on police forces having access to these military-style vehicles, the goal with the BearCat is safety, and few cars can match the protection that this beast provides. Its V-shaped hull can stop .50-caliber BMG rounds and even withstand explosions—keeping both the fuel tank and its passengers safe. Despite the vehicle weighing just a smidge over 17,000 pouns, it can still giddyup thanks to its 6.7-liter turbodiesel engine, cranking out 400 hp and 880 lb-ft of torque. 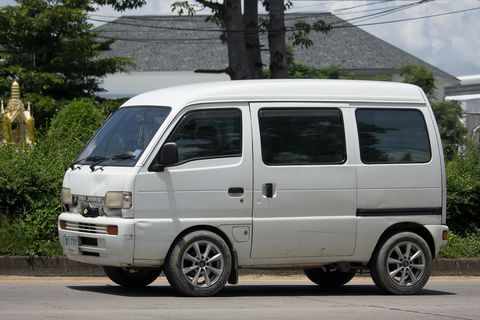 Few Keijidosha (Kei) vehicles—small Japanese city cars—have established a solid reputation as police cars. However, this absolutely microscopic Suzuki Super Carry still aims to serve and protect on the streets of Vietnam. Both versions—pickup truck and van—have a surprising amount of space in the back for the considerable amount of gear police officers carry. With a wheelbase of just 72 inches, the tiny van was actually pretty mighty on the inside—offering up to 34 square feet of storage space. 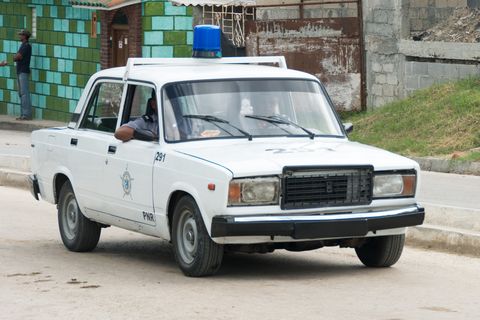 For better or worse, Cuba uses a number of Lada 2107s to patrol its streets—a funny choice given the automaker’s dismal reputation over the years. To offer some perspective, the Soviet brand was originally formed as a collaboration between Fiat and its department of foreign trade.

It’s pretty surprising really that the Lada was so bad, given the fact that it was based on the Fiat 124—one of the most advanced sports sedans of its time. However, the Russians did end up making a number of changes to the original design. Disc brakes were exchanged for drum brakes, a starting handle was added, and the body was made from much thicker steel. The collection of all of these new bits effectively ruined all of the engineering brilliance that had made Fiat’s 124 such an icon. 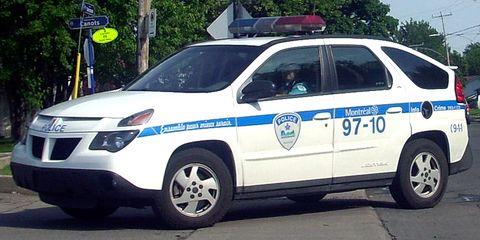 Few cars are quite as dreadful to look at or drive as the Pontiac Aztek. Pontiac’s bad egg is often referred to as one of the worst American cars ever made. Montreal still decided to buy a fleet of them for its officers.

Many motorists argued that the SUVs poor handling and weird options cemented its reputation as one of the all time failures. And they weren’t completely wrong. However, its inability to give chase would definitely be its shortcoming as a police car. With its feeble 185-hp V6 engine, I doubt the design team ever used the words “hot” or “pursuit” in any meetings. In fact, the Aztek is one of the only vehicles I’ve seen where the two-wheel-drive (2WD) variant is actually faster than the all-wheel-drive (AWD) model—the 2WD sprinting to 60 mph in 8.5 seconds compared to 9.1 for the AWD.

Another major sticking point with the Aztek was that it was a challenge to work on—not helped by its chronic unreliability. Just changing the battery was made doubly difficult by a metal crossbar that needed to be removed along with the fusebox to swap it out. A mere 30-second job took several minutes. 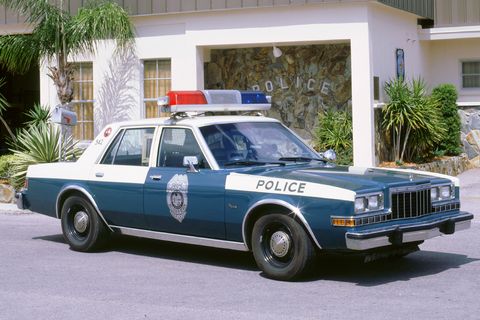 While Americans have the Ford Crown Victoria to look up to, it’s no surprise that we’ve also had some misfits when it comes to police cars. Few are as dreadful as the Dodge Diplomat—which somehow managed a brief stint in the California Highway Patrol.

We can’t argue that it was quite an iconic car—especially after its appearances in Law & Order, True Blue, and even Beverly Hills Cop 2. However, the Diplomat’s biggest issue was its lackluster power output. It’s 5.2-liter V8 engine (fitted with a two-barrel carburetor) huffed out a dismal 120 hp, meaning you could essentially outpace it on a bicycle. That would be bad enough, but the Diplomats shortcomings included poor braking and chronic unreliability. 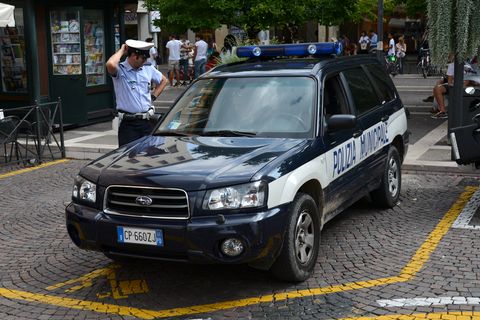 Italy often heralds many of the greatest police cars we’ve ever seen to keep up with the locals. But it would simply be impossible for all of the Carabinieri—Italy’s government agency that oversees policing duties—to afford each of its officers an Italian supercar. That’s why you’ll often find much more affordable vehicles like this Subaru wending through tight city streets. With most variants barely able to break the 200-hp barrier, the police force would almost be better off taking Vespas. 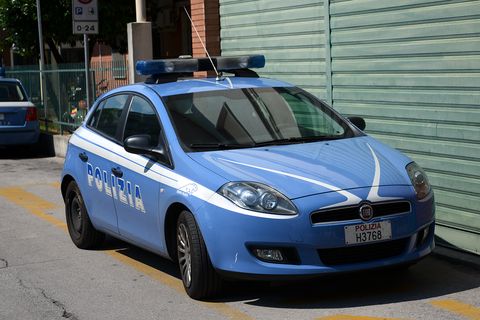 The Bravo isn’t inherently bad. It just isn’t what you’d call remarkable. It’s important to note that only a small few of the Vatican Police Force (Gendarmerie) are actually tasked with protecting the Pope during his international travels. Rather unsurprisingly, his holiness has a dedicated task force—referred to as the Pontifical Swiss Guard—keeping him safe wherever he goes.

While Fiat’s compact hatchback isn’t as bad as a car like the Pontiac Aztek, it’s cheaply made, outdated, and slow. Sure, the cheap interior plastic won’t affect its ability as a police car, but the Bravo is a fairly old model, having first been released in 2007. That’s not to mention that the base trim-level rolled out of the showroom with a feeble 1.4-liter engine putting out 90 hp. Even with its relative lack of power, the basic engine somehow managed to spit out the worst emissions and economy in the line-up.

Matt Crisara is a native Austinite who has an unbridled passion for cars and motorsports, both foreign and domestic, and as the Autos Editor for Popular Mechanics, he writes the majority of automotive coverage across digital and print. He was previously a contributing writer for Motor1 following internships at Circuit Of The Americas F1 Track and Speed City, an Austin radio broadcaster focused on the world of motor racing. He earned a bachelor’s degree from the University of Arizona School of Journalism, where he raced mountain bikes with the University Club Team. When he isn’t working, he enjoys sim-racing, FPV drones, and the great outdoors.

Solution to the Deck of Cards Riddle

How to Give Your Vehicle a Waterless Car Wash

Up Your Halloween Game with DIY Pumpkin Lights

Protect Your Car From The Kia Boys. Here’s How.

How To Build a DIY Fog Machine For Halloween

How To Build a Backyard Fire Pit

How to Use a Wood Chisel