When you can’t force yourself to take another step through a haunted house, you’ve got another option: Climb up on a wagon, get cozy on a bale of straw, and hope your friends can give you some comfort. These haunted hayrides, first made popular over three decades ago in the Northeast, have only continued to grow in popularity—yet no one knows exactly who started the popular Halloween trend.

“I own a hayride, and I don’t think anybody knows [when the first haunted hayride was],” says Larry Kirchner, president of Blacklight Attractions, which runs the popular Creepyworld Scream Park in St. Louis, Missouri, and operates The Darkness, one of the top-rated haunted houses in the country. “When you move over to the East Coast, you see a lot of hayrides. You had a lot of farms out there that couldn’t survive and turned to ‘agritainment.’ What these farmers started doing were attractions on the family farm. The haunted house industry has always been a copycat industry, so somebody started a hayride on the East Coast, and it did well, and another person did it,” he tells Popular Mechanics.

Kirchner says some of the biggest haunted hayrides in the country started as small attractions, but have now expanded, transforming into entire “scream park” destinations that maintain the haunted hayride as the main attraction, but add in a haunted house (or two), a haunted trail, or other haunted attractions.

In the haunted industry, each region of the country has a specialty, Kirchner says. The Midwest is known for turning abandoned buildings into warehouses. The West Coast is a place where amusement parks become haunted attractions. And the East Coast has haunted hayrides.

“One person does it and another and then next thing you know you have 50 to 60 haunted houses in Detroit in abandoned buildings,” Kirchner offers as an example. “On the East Coast, it was a farmer and another farmer. That is how it all got started.”

While lists abound on the top hayrides across the country, Kirchner says he believes some of the best hayrides are the ones with history, simply because of the scope and experience needed to build an attraction the size of a hayride.

A typical haunted house is relatively small compared to a haunted hayride, which might be multiple acres—if not up to 10 acres—in size, much of it themed with skits. “Hayrides are definitely harder to do,” Kirchner says. “It is harder to scare people on a hayride than it is in a haunted house. You can’t have actors jump through the floorboards of the wagon. You have very few ‘haves’ and a lot more ‘have nots.’ It takes a lot of money and a lot of skill, and they just don’t grow on trees.”

When you trace the haunted house, you can go back to London in the 19th century, where Marie Tussaud began with decapitated wax sculptures as a temporary exhibit and then created a Chamber of Horrors permanent exhibition. Call that the origin of the haunted house, created by a maker of death masks for guillotine victims. The haunted house then took a theater twist in places like England and France, and the modern haunted house was a Great Depression-era addition to the United States, writes author Lisa Morton. The addition of Walt Disney’s Disneyland Haunted Mansion in 1969 turned the concept mainstream.

But for the hayride, according to multiple haunted historians and experts contacted by Popular Mechanics, that first ride is a mystery. 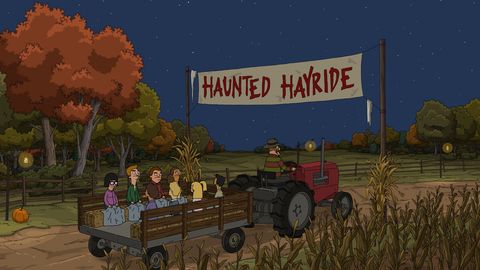 The Haunted Hayride in the “Pig Trouble in Little Tina” episode of Bob’s Burgers.
FOX//Getty Images

What isn’t a mystery is the popularity of the haunted hayride, especially in places like Pennsylvania and Maryland, but also a variety of locations across the country. Pennsylvania’s Valley of Fear claims to be home to “the original haunted hayride.” Now in its 32nd year, the Feasterville, Pennsylvania location has an ever-evolving hayride with other attractions on site. The Bates Motel haunted hayride in Glen Mills, Pennsylvania has been going strong for over three decades, too. The 25-minute ride includes a mockup of a New England church and an insane asylum (separate parts of the ride, mind you).

The list keeps going, from Kirchner’s St. Louis attraction to Bushy Run Battlefield in Pennsylvania, featuring an 18th-century reenactment. Then there’s the Los Angeles Haunted Hayride that started in 2009, inspired by the Northeast’s hayrides, and the Niles Scream Park in Michigan that includes a mile-long trail with over 40 sets meant for “humor and scares.” The Legends of the Fog haunted hayride in Maryland bills itself as one of the longest.

With so much money and over-the-top engineering required, it can take years to build the attraction up. “A lot of haunted hayrides will have animations and scary effects,” Kirchner says. “That is one of the cool things about the best hayrides, they are engineering these major effects like if you were on the Jaws ride from many years ago. Good hayrides incorporate pulling you into something and a bunch of stuff happens to everyone.”

One of the best rides he’s seen involved somebody driving a giant combine behind the wagon, coming up close as if he was going to shred the entire lot. “It was pretty cool, but then he makes a left turn, and it is like a roundabout, and he gets back into position for the next wagon,” Kirchner says. “On a hayride you have to think things through so everything is timed. There are so many types, the majority are not very scary.”

The throughput of customers for a hayride takes a lot longer than a haunted house and when it gets busy you need more wagons, tractors, and tractor drivers to keep up. A hayride has plenty of logistical hurdles—actors keeping their distance from the wagon for safety, the cadence of wagons pulling through the attraction, and the expanse of the area to theme—but the allure is there for customers.

“Inside a hayride you feel safer,” Kirchner says. “You are sitting there and have a whole bunch of friends together, so you feel more comfortable.”

Well, comfortable until a giant combine almost swallows you up.

Is Putin Preparing to Use Nukes in Ukraine?

The Truth About the Black Knight Satellite

How Computers Can Predict When Soldiers Are Tired

So Much You Know About Your Brain Is a Lie