Americans have made tailgating their own—just visit the World’s Largest Outdoor Cocktail Party (that’s the Florida vs. Georgia college football game) or Mississippi’s premier tailgating destination The Grove. Tailgating takes various forms across the country ahead of high school football games on Friday nights, across college campuses on Saturdays, or in stadium parking lots on NFL Sundays.

That football tradition has held steady since the late 1800s. But tailgating didn’t begin with football. It began with war.

🏈 You’re obsessed with history. So are we. Let’s sift through the past together—join Pop Mech Pro.

“If you look at the history of tailgating, it didn’t necessarily start with sports,” Tonya Williams Bradford, a University of California Irvine associate marketing professor who has researched tailgating as a brand of community, tells Popular Mechanics. “If you go all the way back to the Civil War when people knew where skirmishes would be, they’d pack up food and sit on the sidelines and watch.”

Bradford says the history of bringing food to watch events likely dates back even further to Gladiator combat during the reign of the Roman Empire. The Civil War, though, took it to the fields of America and gave root to some of the traditions that appeared just a few years later as college football began.

The First Battle of Bull Run in summer 1861, a fight in the early days of the Civil War, could mark the start of the tradition. An account from then-Union captain John Tidball states that nearby residents traveled on a Sunday to the Virginia countryside to watch the battle among “throng of sightseers” and peddlers “in carts loaded with pies and other edibles.” 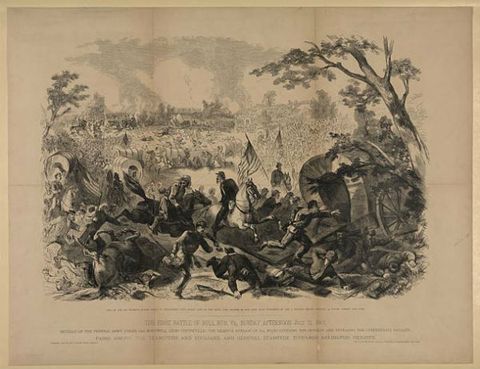 The First Battle of Bull Run, also known as the “picnic battle.”
Library of Congress

The multi-hour journey from Washington, D.C. to the sidelines of the battlefield necessitated food. Sometimes known as the picnic battle, Bull Run was just the first in a long line of traditions started during the Civil War. “It wasn’t that organized,” Bradford says. “We know these skirmishes are happening and we are going to go watch.”

Just eight years later, in 1869, Rutgers and Princeton played the first college football game on College Avenue in New Brunswick, New Jersey, and newspaper reports of the day show there were people watching the game with food in hand. “From the first collegiate football contest there has been tailgating ever since,” Bradford says. “It has morphed into something that is much more akin to a fan community experience than what it used to be: sustenance to get you through.”

The early days of the tailgate concept was simply that: a way to ensure you had enough food on hand for both the journey to and from the game and the contest itself, since concession stands and restaurants around the stadium site weren’t yet common. Even now, modern-day tailgating has that same essence of fans wanting to be part of the event’s ritual for hours on end, tailgating both before and after the contest.

Hungry for More Sports? Read These Next ⬇️

As football grew in the 1880s, so did the precursor to the modern tailgate. “If you think about what is the tailgate, in a simplistic form it is people tucking food in the boot of a car and showing up and eating out of their car,” Bradford says. After the early days of football in the Northeast, “it spread pretty quickly from there.”

By the 1880s, newspapers across the region noted fans sipping champagne (yes, alcohol has proven a mainstay in the world of tailgating) and eating out of horse-drawn carriages near the sidelines of major college games, such as Yale vs. Princeton. A 1906 report of a Harvard vs. Yale game noted fans laying tablecloths on the ground outside cars to host their meal spreads before the game. And in the 1920s, when football stadiums only grew in both number and size, the crush of people coming to town to watch a game outstripped local restaurants’ ability to feed them, turning fans to their trunks to dig out refreshments. 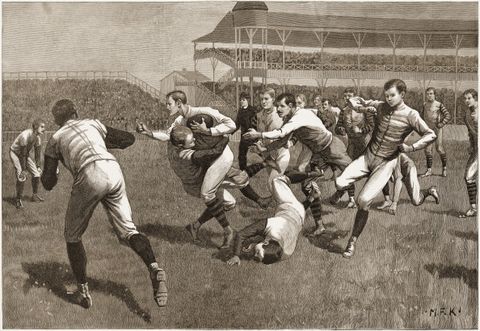 And that truly American word—tailgating—was formed somewhere along the way. Sure, folks fight over who coined the phrase, but none of the theories hold much water. In the end, Bradford concurs, “tailgating” was likely derived just as you’d think: from the back of a wagon, truck, or station wagon folding down and serving as a table for the day’s pregame meal. That meal can change and morph with the times or with a region. It can be a smoker connected to an RV, a lobster boil, a salmon grilled on a radiator, or a simple hot dog on a portable grill.

Born from necessity, the tailgate lives on in both tradition, ritual, and fandom. “There is no other brand community where people paint their face and buy things with your logo on it and buy tickets to all be in the same place together than in sports,” Bradford says. “From a marketing professional perspective, that is always fascinating.”

This love of team has been around since the 1860s, but the way fans express it during a tailgate has grown with technology. First came the automobile. Then the portable grills and coolers. Bradford says the portable generator and long-term batteries really changed the tailgating landscape. From advanced cooling systems to a generator powering what is now an incredibly lightweight 65-inch television, fans can extend their time at the tailgate made possible by “generators that fit in the tailgate of a Honda Accord instead of needing a tractor to move it around. The technological innovations are everywhere here.”

The most elaborate of tailgaters repurpose RVs or old-school buses, plan menus around the teams playing, and set up entire living room and kitchen replicas in a stadium parking lot, all feeding into the elongation of the ritual-filled day. Some locations—here’s looking at you Washington, Tennessee, Baylor—have tailgating options where fans arrive to the stadium in a boat.

“It is really interesting,” Bradford says, “how elaborate these tailgates have become.” At least we are no longer watching real-live battles with food in hand. We’ve evolved at least that far.

40 Vintage Photos of Bars Through the Years

The 12 Biggest LEGO Sets Worth Buying

A Brief History of the Haunted Hayride

The Best Fidget Toys for All Ages

Beautiful Photos of All 50 States