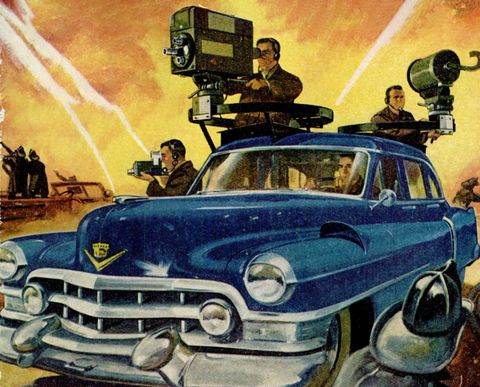 In the June 1953 issue, Popular Mechanics hopped inside NBC's new $62,000 Cadillac—a mobile TV studio unlike any other at the time. Using tank turrets for cameras and an "industrial monkey" to supply bird's eye views, this streamlined Cadillac limousine was a kind of proto-broadcast van that can be seen at any major news event today.

Booooom! An ugly rumble thunders through the canyons of New York City. Fifteen miles away, across the Hudson River, a huge ball of dirty black smoke billows upward over New Jersey's industrial valley. Something big has exploded!

Within minutes, sirens wail as fire and rescue apparatus, along with speeding press and radio cars, head for the river tunnels to converge on the disaster area. Most of this rocketing horde is familiar. But, within the past few weeks, a brand new mystery car has joined the pack. It's a sleek, black Cadillac limousine with blacked-out rear windows. It weaves through traffic with the supple ease of a frightened deer.

From a pair of low hatches in its roof, the heads and torsos of two men jut through steel rings of standard Army tank machine-gun turrets. But they handle no guns. One circular track supports a television camera mounted on rollers that permit it to sweep in a full 360 degrees.

"From a pair of low hatches in its roof, the heads and torsos of two men jut through steel rings of standard Army tank machine-gun turrets. But they handle no guns."

On the other sits a big, barrel-shaped antenna whose "question mark” can be aimed in any direction to maintain continuous line-of-sight contact with a studio antenna atop a skyscraper. Packed in the limousine's trunk, a generator whirs up the electric power to run its ton of special electronic equipment. Behind blacked-out windows, video and audio engineers control what its designers claim as the most compact monitoring studio ever devised. A sardine couldn't gain space in this gleaming vehicle.

The mystery car is NBC's self-contained mobile studio, packed in the narrow confines of a standard production-line automobile. On the way to a disaster like that hypothetical explosion, it may telecast on the run. Once there, it can be set up in stationary position and bounce a signal for 20 miles to the home station for relay. 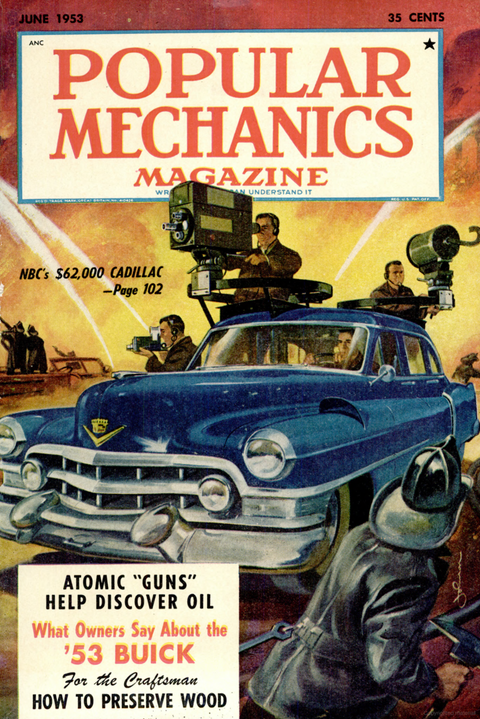 Along with other new developments—including a midget eight-pound TV camera a little larger than a box-type Brownie, and a special "industrial monkey” that can lift a cameraman and his complete outfit here and there over a scene like a Lilliputian in the hand of a Gulliver—the unit is designed to carry TV's roving eye into tight places where massive vans and tons of equipment could never go.

"Television,” says C. H. Colledge, NBC's Director of Engineering Operations who conceived the idea for the limousine studio, "should be as mobile as newsreels.” Most mobile units are as big as moving vans. They're paralyzed in traffic. They can't get down narrow alleys or crooked streets. They bog down on muddy roads and fields. They require the use of a big trailer generator or else there's a hunt for power and permission to string cable.

Mobile unit set up for action, with roving camera in use. Antenna is aimed at relay on nearby building.
Popular Mechanics

To illustrate, Colledge recalls the time a big airliner coming into Washington's National Airport undershot its approach and wound up in the water:

"The big unit we had then couldn't squeeze through a narrow place in the road that led to the water's edge. We couldn't drive it off the road because the monster would have bogged down in mud. We had to park, string yards of cable, rig up a temperamental trailer generator, set up our massive 100-pound cameras and then try to shoot over the heads of the crowd as victims were brought ashore.

We got some swell shots of Homburg hats and backs of bald heads. With the Cadillac, we could have rolled right up to the edge of the water. The cameraman on the roof turret could have shot right down on the people coming ashore and you'd have been able to see the expressions on their faces."

Colledge can cite dozens of similar frustrating assignments, like the time his crew spent an hour power hunting and cable laying before they could televise the scene of the train that crashed through Union Station in Washington. "In spite of it, we were on the air an hour and seven minutes after it happened,” he recalls. “But with the limousine studio, we could have wheeled right up to the station, hooked up the hand camera, and sent a man inside the station with it. We'd have been telecasting ten minutes after the crash.”

Last winter, Colledge and a group of General Motors engineers had put their heads together. A standard seven-passenger car was pulled off the line. Its insides were ripped out. Two months and $62,000 later, TV's wandering midget studio was a reality—just in time to make its debut covering the inauguration of President Eisenhower last January.

Manned by four engineers and a commentator, huddled around nearly one ton of incredibly compact telecasting equipment, the unit slithered in and out among elephants, tanks, cowboys, diplomats and blaring bands of the 10-mile inaugural parade—passing along everything it saw to TV watchers from coast to coast.

There couldn't have been a better opportunity to test the vehicle—which the men had dubbed "the traveling eye." Cameraman and antenna engineer shoved back the sliding panels that covered the turret holes like hatches on a small boat. They sat on their bicycle-type seats and pushed buttons that activated hydraulic pistons raising them into position through the roof. Behind them, in the soundproof trunk and spare-tire space, a three-kilowatt generator, silent and vibrationless, whirred out the watts that allowed them to televise everything in sight with complete freedom of movement. 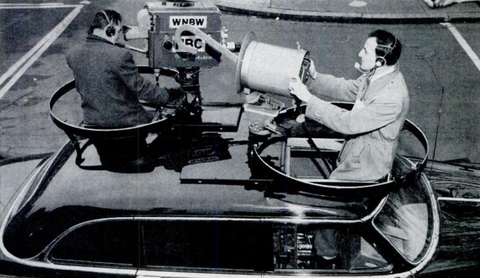 Camera and directional antenna are mounted in tank-type turrets, revolving in full circle on top of Cadillac.
Popular Mechanics

In his turret at the rear, the cameraman's standard RCA Image Orthicon camera wheeled around the steel track that ringed him, picking up events first on one side of the moving car, then the other. Up forward, the antenna man was busy beaming the camera's signals to a receiving antenna atop the Capitol dome where they were bounced to the station's regular transmitter. He does this with a rotating horn-type parabola antenna that looks like a five-gallon paint can with a huge hook on one end. Through an eyepiece like a gunsight, the transmission man kept the massive dome of the Capitol right on the cross-hairs.

The new mobile unit becomes as flexible as a newsreel outfit when used in conjunction with the new Vidicon camera. The secret of this miniature affair is a new-type picture tube, only one inch in diameter and six inches long.

At the inauguration, the driver of the limousine studio handled the Vidicon. Whenever he saw something interesting, he would drive right up to it, lean out the window with his hand camera and, like a tourist snapping roadside shots of the scenery, start banging away.

One of the most spectacular machines that recently stuck its long boom into the TV business, is the industrial monkey, hydraulically operated double-jointed arm, swivel-mounted on the bed of a big service truck. Extended, the arm will reach out 40 feet in any direction, including up. Each of two waist-high buckets at the end of the boom accommodates one man, plus a TV camera and audio equipment. Public utility companies, airlines, fruit pickers and other industries have been using "monkeys” to hoist men up in the air to do jobs where ladders would be impractical.

No one ever thought of it for TV, until NBC's Hit Parade crew had to shoot a sequence showing skaters and crowds at the rink in Rockefeller Center Plaza last Christmas. Crews found that no matter where the camera sat, something was always in the way. Then someone thought of the monkey, and one was quickly borrowed from a local utility. A camera was mounted on the self leveling platform of the big skylift. Camera and audio men climbed in the buckets. 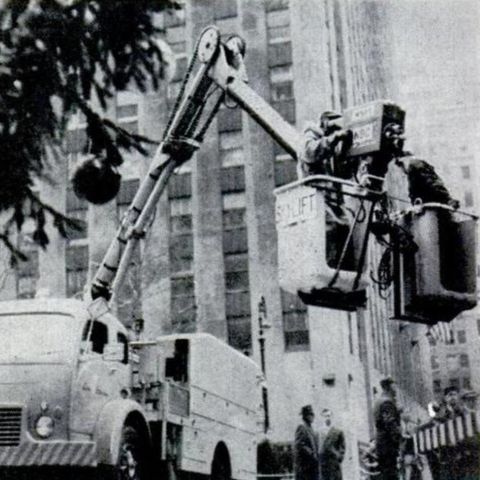 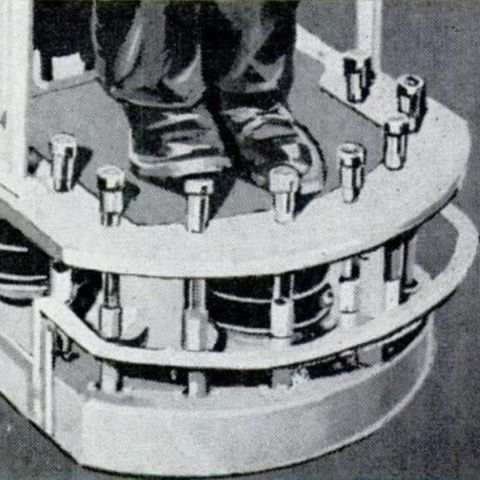 With a touch of a toe button, a cameraman can soar upward 40 feet or extend in any position above truck.
Popular Mechanics

By using eight foot-pedal switches—six for controlling movement of the boom, one for signaling the truck driver with horn beeps, another for emergency stop—they could swing themselves high over the crowd, out over the rink, dip down into the arena and, in fact, put their camera eye in just about any position desired.

The monkey was such a success that, when they planned the inauguration coverage, Colledge and William McAndrew, NBC-TV special-events chief, decided to use this machine as well as the traveling eye. It couldn't have come in handier.

"Crowds were so thick,” recalls Colledge, "that unless a camera was on stilts it couldn't see anything but people's backs. We put the industrial monkey in a side street. The boom arched out over everyone, peeking around the corner like the head and neck of a dinosaur. Cameras got an unobstructed view of the marchers."

One more development that is helping to bring the world to your living-room TV screen in double-quick time is NBC's "hot developer” for kinescope film. Fastest motion-picture-developing unit ever built (according to NBC engineers), it can turn out nearly a quarter mile of negative film in an hour.

Watch This Badass Tribute to the Army's Humvee

The Complicated History of the Very First Flight

The B-29's Post-War Mission—Predicting the Weather

PM at the End of the Steam Locomotive

The Story of the SR-71 Blackbird

The B-58 and the Atomic Flying Triangles

PM Meets the F-16, The Fighter Jet Everyone Wants

The Pros and Cons of NASA's Space Shuttle

How the D-Day Invasion Was Planned

The DC-4 and the Age of Aerial Monsters

The VTOL Future of Flight That Never Took Off